OBJECTIVE: To evaluate risk factors for mortality in geriatric patients admitted to an intensive care unit (ICU).
METHODS: We studied older patients admitted to the ICU in a historical cohort study. Convenience sampling was performed for all patients aged 60 years or older, admitted to the 20 beds of an ICU of a highly complex hospital. Cox regression analysis was performed to estimate risk factors associated with mortality. The significance level used was 5%.
RESULTS: The proportion of geriatric patients represented 45% of ICU admissions in the period. In-hospital mortality was 38.4%. The postoperative emergency surgery variable and the Acute Physiology and Chronic Health Evaluation (APACHE II) and Sequential Organ Failure Assessment (SOFA) admission scores were identified as independent risk factors for in-hospital mortality.
CONCLUSION: Risk factors associated with mortality were APACHE II and SOFA scores for admission and postoperative emergency surgery.

The population of older adults in the world is growing; and population aging in Brazil warns of the need for new planning and care policies for aged adults.1 Studies in Nordic countries estimate a percentage of intensive care unit (ICU) admissions of patients aged 80 and over of 13 to 17.3%, with in-hospital mortality of up to 33.7%.2

The aging of the world population has increased the hospitalization of geriatric ICU patients, which makes this subject pertinent to discussion. In New Zealand and Australia at the beginning of this century, admissions of patients aged 80 and over tended to increase, with an annual increase of hospitalizations by 5.6%.3 In Brazil, the average age of patients admitted to the ICU is 62 years old.4

For better management of the geriatric inpatient, it is necessary that the physician know the physiology of aging and its clinical repercussions, especially those caused by the decrease in body systems reserve. Therefore, knowing the clinical characteristics and prognosis of the geriatric patient admitted to the intensive care unit is fundamental for the planning of good clinical management of this population.5 In the United States, the primary causes of admission of geriatric patients into the ICU are predominantly sepsis, cardiac and respiratory causes, and the increased diagnosis of sepsis in recent years stands out.6

The risk factors for mortality in the geriatric patients described in the literature are age, especially above 80; prognostic scores, such as the Acute Physiology and Chronic Health Evaluation (APACHE II); change in level of consciousness; presence of infection; acute kidney injury (AKI); postoperatively, especially from emergency procedures; and acute heart failure.7-10

The aim of this study was to evaluate risk factors for mortality in geriatric patients admitted to an ICU.

Clinical and laboratory data were collected from all patients from ICU admission to hospital discharge or death. Individuals aged 60 years or older were considered geriatric patients.

Data collection included, upon admission, clinical and demographic data. We collected: age (in years), sex, length of hospital and ICU stay (in days), diagnosis and reason for ICU admission, presence of AKI at admission, hemodialysis, use of mechanical ventilation, use of vasoactive drugs, and hospital outcome. The following scores were calculated: APACHE II;11 Sequential Organ Failure Assessment (SOFA),12 and Simplified Therapeutic Intervention Scoring System (TISS 28)13 at admission to the unit.

These scores are routinely calculated at the research site, as provided by the Brazilian Health Regulatory Agency Collegiate Board Resolution No. 7/2010.14 The APACHE II score is a widely used prognostic score that reflects the severity of the disease and enables the calculation of predicted mortality. The SOFA score allows daily assessment of organic dysfunctions, as well as their alterations in response to instituted therapies. The TISS 28 score is a system that allows evaluating therapeutic interventions performed daily and estimating the nursing workload, contributing to the scaling of human resources in intensive care units. Despite being collected daily for the purpose of prognostic assessment, the SOFA and TISS 28 scores analyzed in this study were those collected on the first day of ICU admission.

The AKI was diagnosed by the Kidney Disease Improving Global Outcomes (KDIGO) criteria.15 The diagnosis of sepsis was based on the Sepsis-3 criteria.16

The normality of the variables was verified by the Kolmogorov-Smirnov test. Results of continuous variables were described by median and interquartile range (IQR). Categorical data were presented as frequency. Cox regression analysis was performed to assess the association between risk factors and survival, using the enter method for bivariate analysis and the stepwise method for multivariate analysis, establishing p < 0.05 to enter the model and p > 0.1 to remove the variable; the results were described as hazard ratio (HR) and 95% confidence interval (95%CI). In-hospital mortality was described as frequency and by Kaplan-Meier survival curve analysis.

The significance level used was 5% and the analyses were performed using MedCalc for Windows version 18.9 (MedCalc Software, Ostend, Belgium). 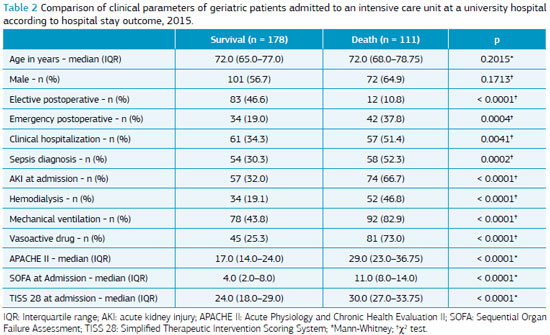 In the Cox regression analysis for factors independently associated with in-hospital mortality, the variable “postoperative of emergency surgery” and the APACHE II and SOFA admission scores remained in the multiple regression (Table 3). Survival analysis shows the use of mechanical ventilation associated with higher 30-day mortality (Logrank, p = 0.0029). 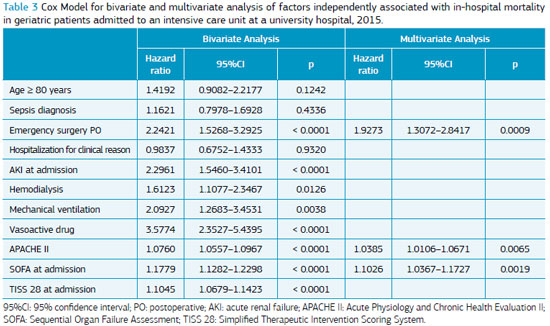 The cumulative 30-day survival for the population studied is 48.3%, as shown in Figure 1. 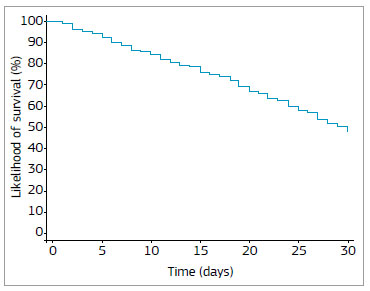 This study, which evaluated older adults admitted to an ICU over a period of 1 year, identified higher mortality associated with admissions due to the postoperative period of emergency procedures and higher APACHE II and SOFA scores at admission.

The use of organ dysfunction scores and prognostic indices has been a reality for decades in the ICU. These scores are used as indicators of severity, calculating predicted mortality based on clinical and laboratory variables.17 The SOFA score is independently associated with mortality in ICU hospitalization studies, since it quantifies the number of patients’ organic dysfunctions.18,19 The APACHE II score evaluates the patient's first 24 hours in the ICU, and also scores age and presence of comorbidities. Correlation between the APACHE II score and frailty in older adults has been shown.20

The frequency of intensive care bed occupancy found in the present study is similar to that of large centers in Brazil. When the fraction of hospitalized patients aged 80 and older is analyzed, the percentage of this study is lower than in other countries, especially in Europe. This finding can be explained by the demographic structure found in these countries, with the most significant population aging.2,21

The increase in the number of geriatric patients in intensive care is also a reflection of the number of geriatric patients undergoing surgical procedures. The physiology of aging delays or does not allow compensatory mechanisms in response to surgical trauma, thus placing the critical geriatric group at risk in the postoperative, especially in emergency procedures.10 Postoperative admissions for emergency procedures are associated with higher mortality in geriatric patients. The need for interventions such as mechanical ventilation and the presence of AKI are also described as risk factors for death in this group of patients.3

The literature classifies octogenarians as very old intensive care patients, a group with increasing ICU admissions. The decision to hospitalize this group in the ICU has been increasingly discussed due to the increased life expectancy of the population, the benefit of hospitalization for this group of patients, hospital mortality, and post-discharge functional status. Very old patients over 80 years, had a similar prognosis to the other older patients in the present study sample. A possible explanation is that there are variables that determine prognosis more than age itself, such as comorbidities and functional and cognitive capacity.18,22 This study did not analyze variables such as frailty scores and the pre-ICU status of the geriatric patients studied.

Therefore, age should not be an isolated factor in determining admission to the specialized bed. The most recent recommendations for ICU admission advise that this screening decision be made based on comorbidities, severity, patient choice for advanced support, and functional status.23 Older adults admitted to the ICU have greater benefit than those not admitted.24 Reason and severity of hospitalization determine the patient's prognosis, not age alone.25

The present study found similar results to those in the literature on the critically ill geriatric patient regarding risk factors for hospital death. The limitations of this work are due to the fact that it was performed in a single center over a 1-year period and by the historical cohort design. Therefore, caution is required for generalizations. For other approaches, it is suggested that further studies be conducted over a longer period to cover more patients and verify the trend in the numbers studied, considering the demographic projection of the geriatric population increase in the coming years. Studies on geriatric patients in ICU are valid for a better organization of hospitals to assist this group of patients.

The percentage of geriatric patients represented 45% of ICU admissions during the study period. Sepsis was the most prevalent diagnosis of hospitalization. Risk factors associated with mortality were APACHE II and SOFA scores for admission and postoperative emergency surgery.

Thanks to the Fundação Araucária de Apoio ao Desenvolvimento Científico e Tecnológico do Estado do Paraná and the National Council for Scientific and Technological Development (CNPq), for the scientific initiation scholarships.