Sarcopenia, lung disease and mortality: a secondary analysis of the CRELES study

AIM: Chronic obstructive pulmonary disease (COPD) is a pro-inflammatory condition leading to wasting states such as sarcopenia. We aimed to describe the effect of COPD and sarcopenia on mortality in Costa Rican older adults in the Costa Rican Longevity and Healthy Aging Study (CRELES).
METHOD: This is a secondary analysis of the CRELES, a cohort study consisting of three waves of interviews. For the current study, data from the first and third waves were used. The dependent variable was survival status. COPD and sarcopenia were independent variables. Bivariate analyses were used to compare mortality curves for each group. Association with 3-year mortality was tested with Cox regression models, and hazard ratios (HR) with 95% confidence intervals (CI) were estimated as a measure of the strength of association.
RESULTS: Of a total of 2704 participants, 54.29% (n = 1468) were women. Overall mortality was 9.05%. Sarcopenic older adults had the strongest association with mortality (HR = 2.65; 95%CI, 1.81–3.90; p < 0.001), followed by those with both COPD and sarcopenia (HR = 2.59; 95%CI, 1.37–4.92; p = 0.003). The weakest association with mortality was found in patients with neither COPD nor sarcopenia. CONCLUSIONS: The synergistic effect of sarcopenia and COPD has been shown to independently increase mortality in older patients. Our results may be applicable to both Latin American residents and subjects of Hispanic descent living in developed countries. Sarcopenia should be assessed in all patients with COPD since the latter is not a disease limited to the lungs, but rather a systemic disease.

Demographic transition should be understood as a success for humankind. However, it does imply a challenge for modern societies. As the population ages, chronic diseases become more prevalent. Respiratory diseases are among the most common conditions in older adults.1,2 Chronic obstructive pulmonary disease (COPD) is a multifactorial entity with a wide range of clinical manifestations,3 which is also frequently found alongside multiple comorbidities. In addition, COPD is a pro-inflammatory condition that leads to increased vulnerability toward wasting states such as sarcopenia.4

Sarcopenia is defined as an age-related loss of muscle mass, paired with a decrease in strength and/or function.5 It is a highly prevalent syndrome, which is often related to adverse outcomes in the studied populations.6 Also, sarcopenia has been extensively associated with pulmonary disease.4,5 Sarcopenia and COPD seem to converge during the aging process. Some of the described associations include lower energy intake leading to lower amino acid availability for muscle synthesis, hypoxemia leading to proteolysis, and increased pro-inflammatory cytokines with concomitant catabolism.3 Nevertheless, the synergistic effect of these conditions on mortality has not been previously described.

Therefore, we aimed to describe the effect of COPD and sarcopenia on mortality in Costa Rican older adults in order to better understand this phenomenon.

This is a secondary analysis of the Costa Rican Longevity and Healthy Aging Study (CRELES), a cohort study of Costa Rican older adults aged ≥ 60 years at the time the study was conducted. It consists of three waves of in-home standardized interviews conducted by trained staff, including in-depth data on demographics, health-related issues, social support, and blood sampling. The CRELES is a publicly available dataset that includes a representative sample of older adults obtained through a stratified two-stage probabilistic sampling design. A full description of sampling methods and objectives can be found elsewhere.7 For the purposes of the present study, data from the first (2005) and third (2009) waves were used. The follow-up period was 60 months.

The dependent variable was survival status, obtained from the next of kin. The date of death was recorded in order to estimate the time (months) to death in the survival analysis.

To define the effect of sarcopenia on patients with self-reported COPD, participants were divided into four groups for analysis:

COPD was assessed by asking the following question: “Has a doctor or nurse ever told you that you have COPD, asthma, or chronic bronchitis?”. The algorithm proposed by the European Working Group on Sarcopenia in Older People was used to define sarcopenia,5 since walking speed, handgrip strength and calf circumference had been measured as part of the anthropometric assessment during the CRELES. Cutoff values were tailored specifically to the studied population (available upon request).

Descriptive statistics were used to characterize the sample. Bivariate analyses included both the graphical assessment of mortality with Kaplan-Meier curves and log-rank tests for comparison of mortality curves for each group. Association with 3-year mortality was tested with Cox regression models, and hazard ratios (HR) with 95% confidence intervals (CI) were estimated as a measure of the strength of association. Independent associations were confirmed by adjusting for confounding variables. The level of significance was set at p < 0.05. Data were analyzed with STATA 14® (further information regarding statistical analysis can be obtained upon request).

All participants provided written informed consent prior to inclusion in the study. All procedures were performed in accordance with the ethical standards outlined in the Helsinki Declaration. The study was approved by the research ethics committee at our institution through the protocol number 03/2017 as disclosed by the document FM-CIE-0049-17. 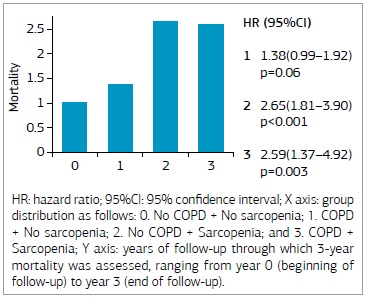 This study suggests an important role of sarcopenia in people with COPD. The strongest association with mortality was found in older adults with sarcopenia alone and with sarcopenia and COPD, regardless of age, sex, smoking status, and number of medications.

This study has several strengths. It is a secondary analysis of a representative sample of older adults in Costa Rica. The cut-off values were tailored specifically to the studied population. Also, to the best of our knowledge, this association had never been statistically proven before in a Latin American population. Therefore, our results may be applicable to both Latin American residents and subjects of Hispanic descent living in developed countries. However, there are some limitations to consider when interpreting the results. COPD was assessed by self-report, since spirometry data were not available. Also, age-related changes in fat deposits and loss of skin elasticity may contribute to errors in the estimation of muscle mass. Because of the study design, it was not established whether patients were receiving any type of treatment at the time the study was conducted.

The CRELES study was performed by the Centroamerican Population Center, at the Universidad de Costa Rica, in close collaboration with the University of California, in Berkeley, with funding from the U.S. National Institute on Aging (Grant R01AG031716).

On behalf of all authors, the corresponding author declares that there is no conflict of interest.