INTRODUCTION: Delirium is an acute change in cognition and attention, common in the postoperative period in older patients, associated with increased costs and longer hospital stay.
OBJECTIVE: To evaluate the frequency, risk factors, and influence of postoperative delirium in older patients submitted to elective noncardiac surgery.
METHOD: This was a cross-sectional, observational study of older adults (65 years or older) hospitalized for elective noncardiac surgery. During the immediate preoperative period (24 hours), risk factors such as age, sex, cognition (MiniCog), functional status (Katz and Timed Up and Go), medications, and clinical aspects were evaluated. Delirium, in the immediate postoperative period (up to 72 hours), was evaluated using the Confusion Assessment Method (CAM).
RESULTS: A total of 83 patients were included in the study. Of these, 44.6% (n = 37) had undergone orthopedic surgery, 42.16% (n = 35), general surgery, and 13.3% (n = 11), urological surgery. Most participants were men (53%), with a mean age of 73 (65–94) years. Overall, 9.6% (n = 8) had postoperative delirium: 6% of the hyperactive subtype (n = 5), 2.4% of the hypoactive subtype (n = 2), and 1.2% of the mixed subtype (n = 1). These patients were older (p = 0.02), had greater cognitive decline (p = 0.01), anemia (p = 0.04), and prolonged hospital stay (p = 0.001).
CONCLUSION: Postoperative delirium was more commonly observed in the older old with cognitive decline and anemia, with an impact on hospital length of stay, highlighting the importance of a more comprehensive preventive evaluation in the preoperative period.

Delirium is a neurobehavioral syndrome caused by transient impairment of brain activity, characterized by an acute onset with fluctuating levels of awareness and attention as well as changes in cognitive functions, and which is invariably secondary to systemic disorders.1 Several predictive models have been developed to explain its occurrence in the post-operative period.2

Postoperative delirium is a common complication of surgical procedures in older patients, occurring in 5 to 50% of cases in the postoperative period,3-5 with an estimated annual cost of 150 billion dollars in the United States.6 There are several risk factors for the development of postoperative delirium in older patients, including cognitive and functional decline, immobility, visual and hearing impairments, and associated clinical conditions (renal failure, anemia, dehydration, infection, electrolyte disturbance, polypharmacy, high-risk medications, and inadequate pain control).5

The objective of this study was to investigate the frequency and factors associated with delirium in the immediate post-operative period of older patients submitted to elective non-cardiac surgery, conducted in a general university hospital, in addition to its impact on length of hospital stay.

This was a cross-sectional, observational study of older adults (65 years of age or older) hospitalized for elective noncardiac surgery at Hospital Santa Casa de Misericórdia, in the municipality of Vitória, state of Espírito Santo, southeastern Brazil. During the preoperative period (24 hours), the following risk factors were analyzed (independent variables): age (in years), sex (male/female), and cognition. Cognition was assessed with the MiniCog, which is a rapid, 5-point test (recall is evaluated using a list of 3 words that the patient should be able to remember after drawing a clock which, in turn, functions as a distractor). One point is given for each word recalled, and 2 points for a correct clock drawing, for a total score of 5. A total score of 3 to 5 is considered normal and of 0 to 2, abnormal, i.e., patients are considered to have cognitive decline.6 Functional dependence for activities of daily living was evaluated using the KATZ scale, which assesses 6 items related to self-care: bathing, dressing, toileting, transfer, urinary or fecal continence, and feeding (0: independent in all 6 functions; 1: independent in 5 functions and dependent in 1 function; 2: independent in 4 functions and dependent in 2 functions; 3: independent in 3 functions and dependent in 3 functions; 4: independent in 2 functions and dependent in 4 functions; 5: independent in 1 function and dependent in 5 functions; 6: dependent in all 6 functions).7 Scores of 0-1 were regarded as functional independence; 3-5, medium dependence; and 5-6, dependence. 8 Functional status was evaluated by the Timed Up and Go test9 (patients are required to stand up from a chair and walk a distance of 3 meters; those completing the task in less than 20 seconds are rated as ‘able’, and in more than 20 seconds as ‘unable’), use of medications (benzodiazepines, anticholinergics, antihistamines, antipsychotics), and presence of anemia (hemoglobin ≤ 13 g/dL for men and ≤ 12 g/dL for women), hypertension (blood pressure ≥ 140/90 mmHg or use of antihypertensives), and diabetes mellitus (blood glucose ≥ 126 mEq/L or oral antidiabetic use).10-12

Delirium (dependent variable) was evaluated in the immediate postoperative period (up to 72 hours) using the Confusion Assessment Method (CAM), a method with high sensitivity (94%) and specificity (98%),5 which has been validated in Brazil to detect the presence or absence of delirium.13 For the diagnosis of delirium, the presence of A and B items plus C and/or D items was considered:

A: acute onset and floating course;

The study was initiated in the preoperative period (up to 24 hours), after written informed consent was provided by the participant, and conducted from January to July 2017. 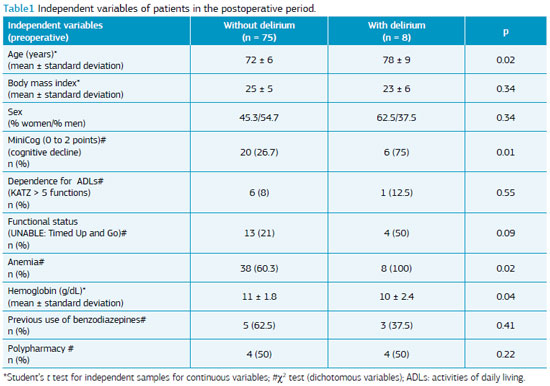 Of the patients hospitalized for elective noncardiac surgery, 9.6% had delirium in the immediate postoperative period; these patients were older and had a longer hospital stay. Raats et al. observed a higher frequency of postoperative delirium after elective colon surgery (18%).14 Gleason et al., in a larger sample of older patients submitted to elective surgical procedures, with a profile similar to that of the present sample, observed a frequency of delirium of 23.9%, with an increase in the length of hospital stay by 5 days on average.15

The present study found a lower frequency of postoperative delirium than that of previous studies,16 which is probably related to the small sample size and non-inclusion of emergency surgery in the study. However, we used CAM for diagnosis, a method used for clinical screening in 75% of studies, as demonstrated in a recent meta-analysis.17

In the immediate preoperative period, we performed a comprehensive geriatric evaluation, adapted from the American College of Surgeons National Surgical Quality Improvement Program (ACS NSQIP) and the American Geriatrics Society (AGS) guidelines,18 with several domains evaluated. Patients who had postoperative delirium were older, had cognitive impairment, and were anemic. We found no association with the remaining independent variables under study.

Several studies have demonstrated cognitive decline as an important risk factor for delirium.16 In the present study, we used the MiniCog test,6 as recommended by the ACS NSQIP and AGS.18 Among patients who developed postoperative delirium, 75% had abnormal scores (0 to 2), showing an important correlation between the two variables (r = 0.308; p = 0.005). Another factor, observed in 100% of the patients who had postoperative delirium, was the presence of anemia in the preoperative evaluation, with a positive correlation (r = 0.263, p = 0.02). Raats et al., in a sample of 232 elective surgical procedures, found that 74% of patients with delirium had anemia in the preoperative evaluation. 14 Preoperative anemia probably reduces tissue perfusion, with reduction of oxygen transport, acting as a risk factor for postoperative delirium. Because of this factor, it is recommended that anemia be detected and corrected in the preoperative period of elective surgery, preventing the occurrence of postoperative delirium.19 Patients with delirium had a higher frequency of functional dependence and greater functional impairment than those without delirium, but with no significant difference between them.

The limitations of this study include the absence of cardiac evaluation, complementary tests performed up to 3 months before the procedure, and the difficulty of conducting a comprehensive evaluation in some patients, who were admitted just before surgery. Also, the small sample size, the elective surgical procedures (orthopedic, general, and urological surgery), and other important variables that were not analyzed, such as electrolytes, use of anticholinergic medications, and visual and hearing impairments, can be seen as limitations of this study.